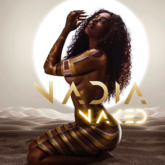 [Verse 1: Nadia Nakai]
I told my team I need a new year
Baddest bitch with blue hair
And all of you who said you were better than me
Question, why ain’t you here?
Everyday I’m in a new pair
New deal rocking new gear
Been around nigga I ain’t new here
Let’s have a chat, nigga, pull a chair
Never played [?], yeah I mean the house of the poor
All those times I shed a few tears
For that shit that never went through
[?] the album naked
Real shit I ain’t faking
You need to know what I’m facing
So listen close to what I’m lasing

[Interlude : Steflon Don]
Dear Nadia, this is you girl Steflon Don
And I just wanted you to know that you’re doing so good
You got this on the lock down
You’re one of the leading females right now in the rap industry and is important to have that
So I just wanted to big up yourself, [?] bragga all the way
Keep doing your thing
Kill dem, kill dem, kill dem, dem dem bloodclaat
[?]

[Verse 2: Nadia Nakai]
Came up from the pavement
Heads down in the basement
All y’all niggas say shit
Well right here’s my statement
All of y’all niggas just won’t get likes
While non of ya are winners y’all just act like