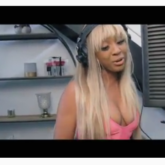 What’s a pawn to a king?
What’s a king to a queen?
You got the power when you got all that he wants in between
I was dodging the scene, watching them gossip and scheme
I know they follow my moves, though they’re not following me
We never lost to a team, we be sweeping em fast
I fucked the game up, these niggas think I’m sleeping with Cass
They be sleeping on me and now they fishing for facts
They sound stupid like they’re inhaling this Helium gas
Hard to accept that a woman is on the top of the throne
So they pin us against each other, man leave us alone
I’m quarantined in my home, writing shit on my phone
I wrote this shit on four-twenty, I was deep in the zone
If I spend a lil’ change, Ima make that back
Calvin Klein on the gram Ima make that clap
They gon’ hear this and say “Tumi play it back”
See, I’m nasty but if I say it I don’t take that back
Feels good when you playing for the A-team
I won’t lie, I feel sorry for the slay queens
Ain’t no more Gucci bags coming, no more Maybelline
We’re locked in no more side-chick enabling
Benched players hating, they never made the team
I’m far from a basic bitch, ain’t no ABC’s
This is a Kodak moment but diamonds make them freeze
I ain’t thirty but I’m Steph when I play the three
All this gwap got me thinking this is make-believe
Throw the towel in, nigga, congratulate your queen
I don’t live in the moment
Been watching opponents, I’ve been seeing them hating
And we never condone it
Niggas stuck in the crib gotta deal with the wife
Ain’t no chemistry there, what a miserable life
You should see all the texts that I get in my box
Niggas acting like Roddy, they just wanted the box