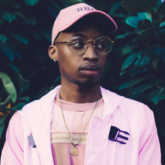 Tshego (Tshegofatso Ketshabile),was born to two ordained ministers in Atlanta, Georgia. Born in the USA by chance as his parents were studying abroad their native continent of Africa, Tshego would frequent South Africa from the age of 4 until he would eventually settle in Mafikeng, South Africa in 2002. He may have been nested in America, but his wings of talent were polished in Mafikeng. The singer/songwriter and producer has been attracting attention from veterans and newcomers alike.

When asked why he chose music as his career path, he answers: “Simply because I fell in love with it. One of the earliest memories I have of myself is being on stage. I was probably 4 or 5. I was always attempting to learn new instruments. I say “attempting” because I never really succeeded in mastering even one of them (violin, piano, drums, guitar). My mom used to tell me to finish what I started, and that’s one of the times I wish I had listened to her. My parents kinda let us explore anything we wanted to. It got to the point where what I really wanted to do was make music, and I did.”

2014 saw the release of Tshego’s free project “Since 1990”, a studio quality project that was released digitally for free. “Since 1990” represents what Tshego feels he has owed the art of music, lovers of music, and himself. Deciding it was time to turn a leaf for the release of his first solo project, Tshego dropped his high school nickname from his act, opting instead to use a shortened version of his birth name.

In 2014, Tshego also appeared on CassperNyovest’s Platinum selling album “Tsholofelo” on the track “Cold Hearted”, which, despite not being a single, is a fan favourite. Furthermore, Tshego and Cassper’s relationship continued which lead to Tshego signing with Family Tree in 2015. Tshego also feature’s on Cassper’s Platinum certified sophomore album “Refiloe”, appearing on the song “A Lot To Live For”, whilst also receiving writing credits on the album for the song “Upper”.