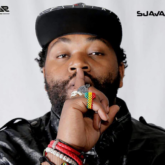 Jabulani Hadebe was born and bread in a small town named Bergville in Kwazulu Natal. Known to his fans as “Sjava Ka Jama”, the proudly Zulu youngster is a great exemplar of true artistry – having trusted his passion for the arts from childhood and actively persuing a carrer within the entertainment industry.

The multi-facited artist was  rst known for his acting and musical compositions. He has acted on SA’s biggest soapies such as Generations, Zone 14, 7de laan, Soul City and the controversial Gugu no Andile..

Sjava recently featured on Miss Pru hit single “Ameni” which also features the Ambitiouz Entertainment family of artists and reached over 250 000 free-downloads. His prominent feature and hook on the chorus is much appreciated by fans at festivals as they sing along.