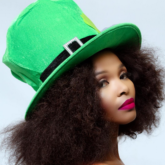 Born and Raised in the Eastern Cape, Simphiwe Dana’s name means ‘gift’ and many of her fans would agree that she is just that, a gift to the SA music scene. In a short period of time tSimphiwe Dana has become one of South Africa’s favourite daughters. Her music has a fresh sound and her unique voice complements it perfectly. Her debut album Zandisile took a lot of music lovers by surprise. It is modern South African music with a timeless revolutionary message.

Simphiwe Dana says that her music is mostly influenced by what is going on in people’s daily lives. She talks about the struggle that black people are going through, despite South Africa’s supposed freedom, and status as a democracy. Tracks like Thwelubunzima and Vukani call for people of colour to wake up and see the light, but then she also has tracks like Zandisile which is a song of hope, and Ndiredi, the hit single for which she won a couple of South African Music Awards.

‘I am a very cultured person’, she says, ‘as an African person we were made to feel inferior and a lot of African people stopped practicing their culture because it was seen as witchcraft or uncivilized. My music is inspired by African people and the love they have for song. I grew up in a rural area and every time there was some kind of gathering, such as a wedding or circumcision, we sang to celebrate the event. Music has always been my first love, but because of financial problems I was forced to study IT after matric in order to survive and I have worked in the IT industry until reality caught up with me and I couldn’t ignore my calling to become a musician anymore. I started off performing at poetry sessions in Yeoville and Newtown and one day after a performance a talent scout from Gallo records approached me and asked me to give her a demo tape, which I did, and weeks later they asked me to sign up with them. The rest, as they say, is history’.