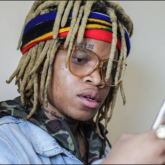 Saudi, was born and bred in one of Soweto’s townships, Senaone. Growing up in a family that loved music and had a large collection of records. The likes of Brenda Fassie, Michael Jackson and Nina Simone inspired him to pursue music as a career. The 21yr old recorded his  rst song on an electronic keyboard at the tender age of 13.

2016 sees Saudi propelling to greater heights as he currently features in the hit single “Ameni” by Miss Pru, which features Emtee, Fi  Cooper, B3nchmark, A reece sjava and Saudi.

As a producer and songwriter, Saudi talents played a role on A-reece it single “I couldn’t” and DJ Citi Lyts hit “Washa” featuring the ambitiouz family of artist.

Following his  rst feature, Saudi’s debut single under Ambitiouz Entertainment “There she go” was released

on the 15th of April on free download. Coined African

Trap music by the Ambitiouz family of Artists, The creative genius, has created a mellow and soulful rendition inspired by lack of loyalty in relationships.