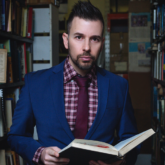 Three years is a long time to wait if you’re an RJ Benjamin fan. That’s how long he’s been away, crafting and creating a new and satisfying space that represents everything that is now, while hinting, just a little, at where he’s headed. Armed with his first full-length album in close on half a decade, Inside represents the in-demand soundscaper and music maker – firing on all cylinders – happily and confidently confirming his worth as the multiple award-winner he is… one hit project and album at a time.

Hot on the heels of Mzansi Magic’s Clash Of The Choirs’ inaugural season earlier in the year, RJ Benjamin accepted a second invitation as musical director to season nine of Idols South Africa that commences this September. “I have a passion to enhance what musicians make and support the industry we all play in,” he says. “I came into the business more than a decade ago and I intend building my credibility by delivering quality that points to a long term career, rather than simply being a flash-in-the-pan.”

An Allenby Campus graduate back at the turn of the millennium, RJ stayed on, as a then 22 year-old teacher who today can claim the likes of Elvis Blue and Robin Kohl as just two of the many who passed through his classroom during his tenure at the now sadly defunct school.

Between teaching RJ found time to shimmy up and befriend the inner sanctum of the hip-hop and dance fraternity sufficient to begin a career that’s entrenched and growing still. “My diary is my songbook,” he says. “I write songs in the same way diaries and blogs are filled.”

Where Danny K’s popular, RJ Benjamin is referenced, invited and embraced by every critical genre; record label and artist keen to push the boundaries of their original idea. Teacher, writer and producer RJ’s credibility comes from more than 10 years of mining and polishing and giving it; “some of that” as he affectionately put it. “I’ve have, through collaborations, song writing, performing and teaching built a space that affords me the opportunity work for myself today, on my own terms, and only when I choose to.”

Black and white he isn’t – RJ Benjamin is the full spectrum and every facet in-between. Vocalist, composer, songwriter, producer and teacher he successfully blends soul, pop, hip-hop and funk and house music into scintillating songs. His creative magic has redefined the R&B and neo-soul perspective in the South African music industry where his talent and insight continues to influence and enrich every project he works on.

Not without controversy, RJ’s challenged the system over the years, becoming despondent with the music industry and even taking a break from recording and performing for a while. Yet, music runs in his veins, and RJ returned in February with Inside, one of the coolest, most sophisticated albums to have come out Mzansi yet.

In 2004 he released his groundbreaking Ghetto Ruff debut album, Who Am I, which marked him as South Africa’s brightest new soul star. The critically acclaimed album featured collaborations with Tamara Dey, Ishmael, HHP and Pitch Black Afro. RJ produced the majority of the album, while 37mph and Bongani Fassie lent their skills as collaborating producers.

His 2008 release, Swimming In The Soul Of Music, represented a more sophisticated artist, and showed off the hard work he’d poured into his craft. The musician had focused his musical roots and influences of soul, jazz and funk and created and album that with hindsight represented a time better than it did its maker’s real ambition. That said RJ won the award for Best RnB Album at the Metro FM Awards later that same year.

In 2009 RJ recorded Change The World with Soul Candi. His inviting vocals and inspirational message seduced the nation and teased the ecosphere. An instant hit and anthem on radio stations and dance floors all over the South Africa, the track received both a Channel O and SAMA nomination for Best Dance Video and Song of the Year respectively. Ironically, the song did actually change RJ’s world – the soul star had inadvertently introduced himself to South Africa’s house audience… and they couldn’t get enough! “I dabbled in house, and tinkered with dance, but I know now where my real ability, love and contribution lies,” he says. “I enjoyed my time in house, but my heart wasn’t in it. That was when I realised my calling is in supporting housemasters and mistresses, rather than leading. With each artist I have the privilege and pleasure of working with, each grows my frame of reference and that’s good for everyone.”

Following the huge success of Change the World, RJ released the album House Bound that showcased his vocal and writing skills and his house flirtation that ultimately returned him to his RnB and soul roots and core sensibility.

With Inside RJ has embarked on something entirely original. He has, after a three year, self-imposed sabbatical, effectively remixed and “soulified” house tracks featured on his House Bound album, as well as popular house tracks RJ featured on with Dr Duda, DJ Kent and DJ Fresh. Inside is a reminder to people of his artistic versatility. In RJ’s words, “I’ve taken 13 house tracks that I’ve sung on over past five years and re-interpreted them in a way I felt like taking them.”

“My house curiosity has been transformed into funk, soul, rock, flamenco, samba, jazz and various other styles that may be a little hard to describe, suffice to say I’m loving every minute if it!” he concludes. Cosy up, engage and get to grips with Inside. And while you’re delighted, expect to see and hear it contents live, across the country in the months ahead. Never one to rest on his laurels, RJ live will only and surely be topped by the next exciting chapter that’s being written as you read this. Expect white-knuckle brilliance because that’s all RJ Benjamin knows to create.