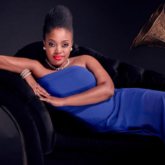 Relebogile “Lebo” Mabotja is a woman of many talents. She is a successful actress, presenter,radio host TV producer, musical director composer and music producer. With 13 years in the media and entertainment industry, she sits as an adjudicator and board member for the Nationa Eistedfodd Academy which celebrates excellence in the performing arts for the youth and has evolved into a succesful businesswoman with the establishment of her company, Lebotja Media in 2013.

Relebogile began her musical career at the age of 5 singing on stage and in choirs. She represented her province the North Gauteng Youth Choir from primary school and went on to join the National Youth Choir where she honed her classical and musical skills. She excelled with music as a subject, taking voice as her instrument for which she received distinctions.

Relebogile successfully bagged her first professional role in Fame – The Musical because of her musical talents at the age of 17 while still in high school. From there she went on to perform in various other musicals as a lead. Relebogile has performed with and musical directed bands The Wine Collection that she worked with for many years performing at The Blues Room and various other corporates and events for the length of her career.

2015 has seen her and Lebotja Media take on the music of SABC 1’s new music platform Koze Kuse, SABC 1’s Mzansi Insider and SABC Sports radio campaign for Laduma, Sport@10, Soccer 411 and SoccerZone. She has also gone on to consult for musicians such as Ringo Madlingozi for their live shows. This year sees her take on the challenge of acappella music in SABC 1’s The Sing Off South Africa as Musical Director. Her musical career has seen her take on a SAMA nomination for a Best Kiddies Album in 2010 and win the coveted SAMA for Best Kiddies Album in 2011 with fellow group, African TreeHouse.

As far as other accolades go, Relebogile has bagged awards for producing Music Video for Most Gifted Hip Hop Video in 2010 (Channel O) and Best TV Soap Ensemble in 2011 (South African Film and Television awards) and been nominated for Best Female in a Musical and Best Newcomer at the Naledi Theatre Awards in 2004. This year she was nominated for the songwriter award WAWELA for the title music of SABC 2 song, You Belong.

Relebogile is one of the few successful young working black female composer/producer/musical directors in South Africa and hopes to grow that profile using her extensive knowledge and passion for music. She also looks to growing her media empire through her televison and music production and record label business Lebotja Media.