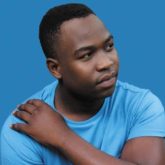 Refentse Morake is an Afrikaans singer who grew up in Vereeniging. He was 17 when he was noticed on the sidewalk of his parents house in Unitaspark, a suburb of Vereeniging, while playing guitar and sang. An elderly lady – Cecilia Marchionna, or Tannie Kleintjie “, heard him. She approached him and asked if she could take a video of him and put the video on Facebook. He agreed And thought the old tannie probably had just a few Facebook friends, but that was a big understatement.

The Facebook video shot at 30 000 views on the first day, up to 160 000 four days later, and continues to grow. In April 2015 he performed in Baron van Reedestraat in Oudtshoorn. That evening, organizers at the KKNK for Morake took behind the scenes of the festival’s opening concert, where he met several music stars, including Karen Zoid, and a music contract was presented.

Refentse releasesed his debut album My Hart Bly in ‘n Taal in 2016, and his second album Deur My Venster was released in 2017.