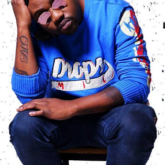 It’s hard to believe that only 7 short years ago the world was only just sitting up to notice the now unmistakable voice of Reason. At the time, showing up on YFM and delivering breakfast jingles for DJ Fresh’s wildly popular Unrestricted Breakfast Show, only a few realised they were witnessing the birth of one of South Africa’s true music stars.

Reason had earned every one of his stripes from proving his lyrical dexterity in rap battle after battle on the Johannesburg underground Hip-hop scene.

Those formative days are now behind the rapper born Sizwe Moeketsi in Tembisa, raised in Katlehong, and who whilst growing up, inherited a wide collection of Hip-hop CDs that once belonged to an older cousin of his. It informed the style of music he chose and mastered into an art form and now, a livelihood.

Lately, Moeketsi is showing the vital signs of a consummate and well-rounded artist. Nowhere is this more evident than with his current album Audio 3D, one that wholly and honestly encompasses the full range of his 26 years of experience as a lyricist, an artist, a lover, a son, a man, a human…

‘I use “Reason” to tell Sizwe’s life stories,’ explains the rapper, ‘Things I go through, think, believe and have come to learn and understand about life.’

Sonically too, he takes the multi-layered approach using electro, alt rock, and good old south African four to the floor beats to forge a classic album with the help of a stellar cast of producers: Sithembiso ‘Instro’ Herimbi, Tiago Correia-Paulo and IV League.

Perhaps the most significant marker of the industry main event that this album is comes from a rare appearance by South African Hip-hop’s sleeping giant of production Battle Kat. Having collaborated on Reason’s previous outing The Reasoning, the two are reunited for a memorable moment on Can’t Stop The Change to which rapper and Motif mogul Tumi Molekane contributes and provides an added sense of occasion.

In 2012, Reason’s foray into the spotlight began with Walk On Water, his spot on the motion picture soundtrack for the multiple international award-winning South African film Otelo Burning. The song also appears as a hidden track on Audio 3D.

Then came Do It Like I Can, the album’s lead single, which reached number one on various regional and national radio stations including Metro fm, 5fm, and Ukhosi fm charts, eventually topping the South African RAMS local radio airplay charts.

The follow-up single A Lot On My Mind escalated the buzz to a full-on frenzy thanks also to refined first-rate bass and synth-heavy production by South African Music Award winner 37mph (JR, Jozi, Nomsa Mazwai). It’s a catchy and introspective song featuring Lebo Mochudi (former lead singer for Voodoo), and whose disarming sincerity plays up the character of Reason, which stands against the backdrop of a genre infamous for celebrating embellished stories and half-truths.

For being consistently believable, Reason attracts the attention of brands and events for whom authenticity matters and is what has so far earned him enviable career highs like freestyling with Masta Ace, hosting Channel O’s Africa wide rap contest MC Africa, and supporting the likes of Talib Kweli and Kanye West. How he does it is simple: “I always end up leaving it up to the consumers. Other rappers like to paint pictures of themselves where they always look good, I just paint pictures.”