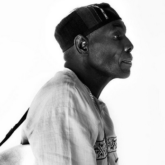 With his husky voice, he has become the most recognised voice to emerge from Zimbabwe and onto the international scene and he has earned a devoted following across Africa and beyond. A member of Zimbabwe’s KoreKore group, with Nzou Samanyanga as his totem, he sings in the nation’s dominant Shona language along with Ndebele and English. He also incorporates elements of different musical traditions, giving his music a distinctive style, known to fans as Tuku Music. Mtukudzi has had a number of tours around the world. He has been on several tours in the UK, US and Canada to perform for large audiences.

Unlike Mapfumo, Mtukudzi has refrained from directly criticising the government of President Robert Mugabe.

He is the father of five children and has two grandchildren. Two of his children are also musicians. His son Sam Mtukudzi, a successful musician in his own right, died in a car accident in March 2010.Mtukudzi was born in a family of six; one of his sisters and his only brother, passed away.