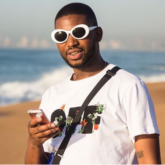 Smiso Zwane (born 27 July 1983), commonly known by his stage name Okmalumkoolkat (sometimes stylized as OkMalumKoolKat) is a South African rapper and half of the rap/electronic duo, Dirty Paraffin. Smiso Zwane is known for a feature in Cassper Nyovest’s “Gusheshe”, and his famous single, “Mswenkofontein” featuring $tilo Magolide & uSanele

Okmalumkoolkat was born in Umlazi, Durban. After graduating from college, Okmalumkoolkat moved to Johannesburg where he met Doctor SpiZee, with whom he formed Dirty Paraffin.

The pair lived together and both shared a mutual passion for art which eventually led to them collaborating several times. After the house in which they lived was robbed, they had to go job hunting. Using the skills he had garnered during his college years, he designed layouts and brands for companies; most notably, Nike.

Okmalumkoolkat was featured on Cassper Nyovest’s “Gusheshe” which was met with positive reviews. He is currently signed to Austrian label Affine Records under which he has released his debut EP, Holy Oxygen. In 30 December 2016 he released his debut album Mlazi Milano which were supported by two singles before release which were “Ntwana Yam'” and “Gqi”. “Ntwana Yam'” Was released mid August, 2016 and “Gqi” was released a month before the album. The single “Gqi” features Durban-formed duo “Amadando” and was accompanied by its music video mid March, 2017. The album was released both in iTunes and officially in music stores.