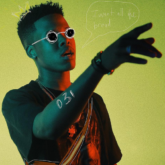 The 20 year-old started rapping at the tender age of nine, having been influenced by his older brother who was a producer at the time.
He took it upon himself to learn the tricks of the trade and eventually mastered the process of music production.
He then went on to sign to Durban based artist management company, Free World Music.

The stage name ‘Nasty C’ was given to him by one of the first producer he ever worked with because of the vulgarity of his lyrical content.

From the onset of his rap career, he drew inspiration from Hip Hop greats such as American rappers T.I, Lil Wayne, Drake, Hopsin and Kendrick Lamar.