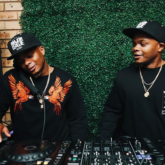 The Mbere twins Banele and Bandile are more than just a ‘double whammy’. Not only are they prolific DJs with a popular appeal and pioneers of New Age Kwaito which is influenced by hip-hop, but they are accomplished businessmen.

They haven’t released an album yet, but their popularity has grown exponentially in the recent past fuelled by the success of their well produced and executed singles.

Now signed up as Mabala Noise artists Major League is set to release their debut album in October.
“We have the same vision and goals as eMabalabala, which is to take our artistry to the next level and understand the international space. Being here makes it easier to believe that we can spread our wings even further,” says Bandile.

“We’ve urbanised kwaito. It’s a movement of a young black culture and it will never die. It’s the authentic sound from South Africa,” says Banele.

Their 12 track album is set to be a hit parade featuring some of the finest artists South Africa has on offer. Their collaborations will feature the likes of Cassper Nyovest, Riky Rick, Okmalumkoolkat, Kwesta, Maphorisa and Nasty C.

The dynamic Mberes were born in Boston, Massachusetts in the US to exiled South African parents. Their father Dr Aggrey Mbere was a politician and played the piano, while mother Musa Ngcobo held Masters in Social Work.

“Our parents were musical. They met in the US at a Hugh Masekela concert. And we grew up around uncle Hugh, uncle Caiphus (Semenya) and aunt Letta (Mbulu). We go to them for advice and we get the business acumen from them,” shared Banele. They returned to South Africa in 1996 to settle in Joburg.

They cut their teeth as event organisers before moving into the spotlight as music stars.
Since 2009 they have become a permanent fixture on the party scene as a promoter’s dream and crowd pleasers as mix and club DJs. They have graced dancefloors across South Africa and neighbouring countries such as Botswana, Swaziland and Lesotho.

They have performed alongside Kanye West and were headphone and footwear brands ambassadors.
In 2013 they launched Major League Gardens an event that today attracts upwards of 15 000 revellers in one night.

Their forthcoming album will catapult these game changers into the stratosphere of fame and critical acclaim if their recent enterprising releases are anything to go by. They have their eyes set on taking over Africa, Europe and the US. Stay tuned.