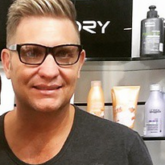 He has paid his dues, and since the release of his debut album For Your Precious Love (1995), followed by a series of pop work in English, Kurt hit it big time with his Afrikaans debut Net Jy Alleen (Only You) in 2002.

Whatever Kurt Darren does, the keyword is quality. He is an accomplished, versatile performer and songwriter, dedicated to his craft and his audiences. This gentleman carries his success with modesty and pride!

Kurt Darren is used to innovation and recognition. He has paid his dues. He is living proof that there is life after a mega hit. His party smash hit Meisie Meisie was followed by numerous other hits, perhaps the most well-known Loslappie and Kaptein (up-tempo) and Hemel op Tafelberg (ballad). His English hits Standing on the edge and My Facebook song have become favourites on English radio (Kurt wrote many of his hits in collaboration with Don Kelly and Marc Brendon). Kurt is currently one of the most popular and busiest artists on local hit parades, stages and festivals around the country. Kurt has proudly reached the top of mainstream popular music in South Africa, especially in the Afrikaans market. With his guy-next-door image and designer looks he’s also gaining appreciative support amongst English speaking fans, especially with the release of his album Smiling back at me, which reached the second spot on the official Hit Parade. The repertoire of his CD’s are a carefully and balanced selection of soothing ballads and up-tempo songs in both Afrikaans and English. He offers his loyal fans a variety of popular catchy tunes and contemporary dance beats. Kurt Darren continues to impress his audiences.