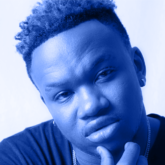 KLY, whose real name is Siyabonga Mkhize, is a 23 year old singer, songwriter and creative that was born in KZN and raised in Johannesburg.

KLY [which originated as an acronym for Keep Love Young] was formerly known as a dancer. He showed off his dance prowess by dancing for a hip hop crew called 300. It wasn’t’ long until KLY’s love for music increased.).

KLY started getting musically inspired by the likes of Drake, Party Next Door, Wizkid and Trey Songz. In his early days of being exposed to the entertainment space, the self-taught singer and songwriter initially aspired to be a rapper. He then took it upon himself to download videos and tutorials that influenced him to enter the music industry, this led to his first studio experience.

Since 2010, KLY had been working on perfecting his vocals for 7 years as well as strengthen his writing skills. KLY has co-written Mafikizolo’s hit single “Kucheza” which is currently surfing at over 1 Million views on YouTube as well as “Wagwan” by Gemini Major to name a few, this was a result of his dedication and hard work. Expanding his career as a musician, KLY joined award winning Record label Ambitiouz Entertainment. “Ambitiouz will give the push that I need and want to have and only makes sense as far as pushing this career forward” he says.