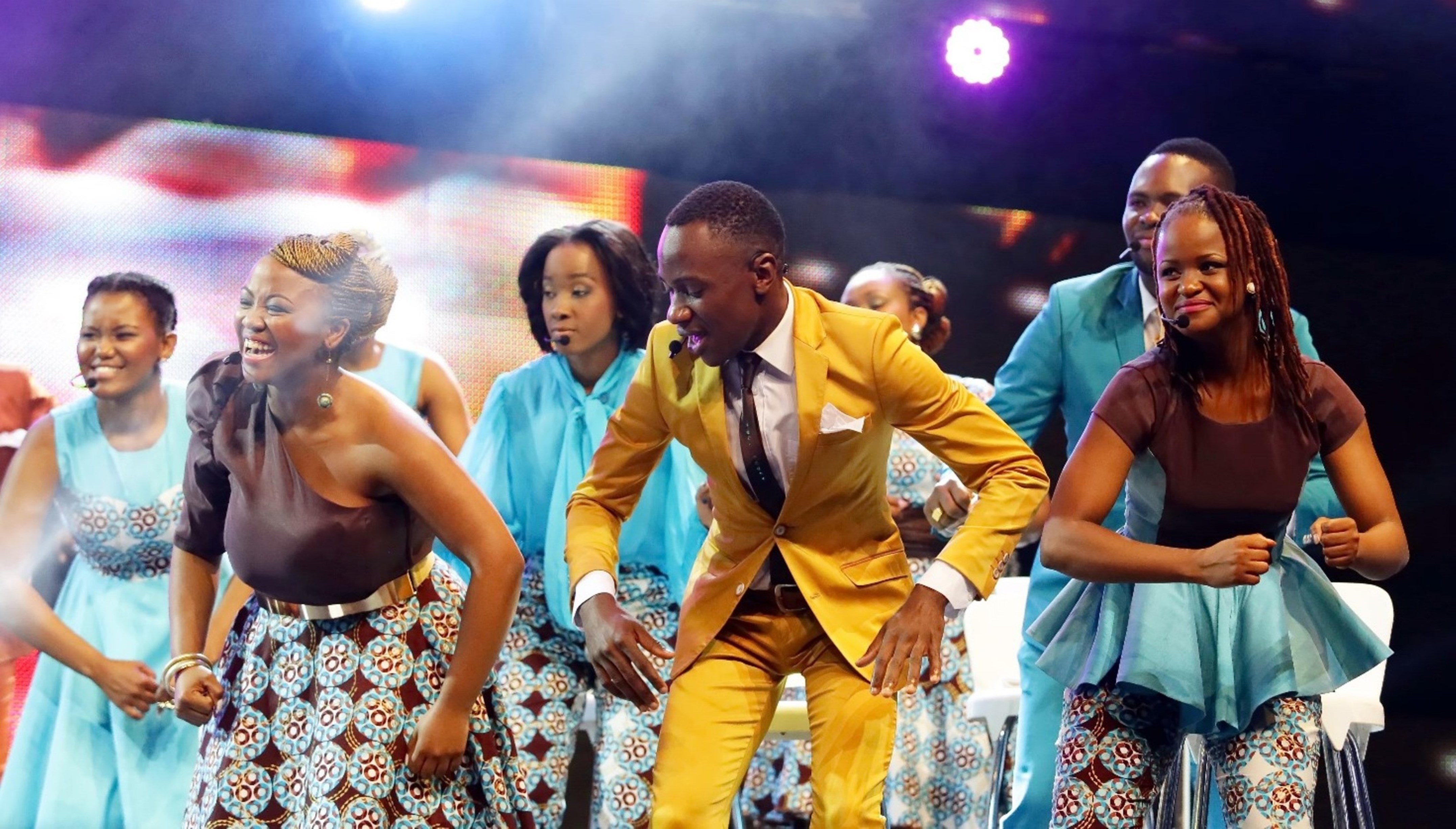 The concept is basically created in such a way that performers are selected through an intense auditioning process, after which they attend music workshops. During these workshops they learn skills such as songwriting to performance. We then rehearse a repertoire for about two months. After that the crew is on the road for the whole year. Performers always sign a 1 year contract to be in the Project, although there will be some performers that will be with Joyous celebration for more than a year.

Joyous Celebration is an inspirational music extravaganza, which comprises of loving interpretations of existing spirituals, traditional hymns and original compositions, all produced by the magical combination of its founders. The performances boast a sterling cast of fresh, raw talent from all around the country who are identified and handpicked from nail-biting competitive auditions amongst others.

South Africans have always been spiritual people & back in 1994, when Lindelani Mkhize, Mthunzi Namba & Jabu Hlongwane conceptualized the project, the country was going through a lot of changes & part of this process was a healing one. The birth of Joyous Celebration was in this period – recognising a need of creating & establishing a project that would uplift & heal the nation, whilst reflecting it’s inspirational transition as well as celebrate the talent that we have. Two years, later in 1996, Joyous became a reality and the first ever Joyous production was unveiled and presented in the public domain.

“It seems just like yesterday when the concept of Joyous Celebration was birthed,” Mthunzi Namba recollects. “The year was 1994 when we decided we wanted to do a concert to give thanks to God for the new Democracy that we achieved as South Africans.” Lindelani Mkhize adds. These three friends and partners established this Gospel Music Concept, as they refer to it with the aim of:
• Reviving and celebrating spiritual music which has inspired and strengthened our nation over time and to elevate the status of this music genre in South Africa.
• Unearthing, developing and showcasing new and talented musicians, therefore providing them with a solid platform from which to launch their careers and putting them on what has arguably become the biggest stage for any artist in South Africa

Over the years Joyous has produced solo musicians that come out of the concept to record their own albums and establish flourishing careers that go beyond Gospel music. “Its all about music, all kinds of music”, Jabu, one of the founders says. “We are driven by the desire to see careers established and young people developing into fully fledged musicians”. He continues. “We have worked hard over the years to establish a solid brand in the music industry, while providing a platform for young talented singers to learn and grow and stand on their own “says Lindelani. The likes of Ntokozo Mbambo, Nqubeko Mbatha, Brenda Mtambo, Mahalia Buchanan, Khaya Mthethwa, Brian Temba and Swazi Dlamini to mention just a few, have had their skills honed on the Joyous stage.

The appeal of Joyous Celebration stretches far and wide and is inclusive of all people who appreciate contemporary, inspirational music regardless of age, race or creed and people travel far and wide to watch Joyous Celebrations’ live electrifying performances whilst some Joyous Superfans actually follow the group everywhere they perform.

THE BRAND TODAY
Joyous Celebration has re-positioned contemporary gospel music in South Africa and contributed to giving it a solid platform and the recognition it deserves as one of the highest selling & most popular music genres in this country.

The name Joyous Celebration is now a household name that has become synonymous with Gospel music within South Africa and beyond. The three friends, Lindelani Mkhize, Jabu Hlongwane and Mthunzi Namba are still at the helm of this Musical Powerhouse with both their friendship and business partnership intact and flourishing.

20 years on, they have not looked back and the group has grown from strength to strength and reaching this anniversary is not only a significant milestone for the group but also for the South African Contemporary Gospel music industry as a whole. Joyous Celebration has performed to over a million people during their existence. The sold-out concerts have established a tradition of leaving their fans asking for more, even after the 5 hour riveting performance. “At this stage, there is no venue we don’t sell out in South Africa and beyond, that is the hard work paying off and we are so grateful to our fans” added Mthunzi Namba.

Over the past 7 years, Joyous has made an indelible footprint across the borders of South Africa, touching countries such as Swaziland, Botswana, Zimbabwe, Ghana, Kenya and Cameroon, and 2016 will see them also performing in Namibia and Nigeria among others. “We are proud to be positioned as an African Entity since we started including talented singers from other African Countries in the group. Artists such as Hadji, a percussionist from Senegal, Uche from Nigeria, Mkhululi Bhebhe and Eric Moyo from Zimbabwe, Nomzamo Dlamini from Swaziland and the latest being Pastor Takesure also from Zimbabwe are some of the inclusions from the continent.”

As the longest running contemporary gospel ensemble, Joyous Celebration is consistently “re-inventing” itself, setting the trends in the gospel genre whilst maintaining the highest quality in music and presentation. This is the reason that the group has endeared itself to a growing following over the past 20 years and raked in all kinds of music Awards both in South Africa and beyond. Joyous Celebration is also proud to be supported by telecoms giant, MTN since 2010, hence the name MTN Joyous Celebration and will see the production into their biggest milestone to date in 2016 – Joyous 20.

Taylor Swift – Look What You Made Me Do Lyrics

Lyrics For Look What You Made Me Do By Taylor Swift [Verse 1] I don't like your little games Don't...