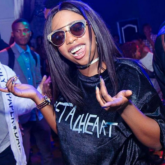 Five-time South African Hip Hop Award winner, Gigi Lamayne, is making her mark as a talent to be reckoned with within the South African music industry.

From chart topping radio singles, to graduating with 4 distinctions and top of her Media Studies Class from WITS University, to getting brand endorsements from the likes of PUMA, Barcadi and Flying Fish; Gigi Lamayne is making a statement and this is just the beginning of what the country will see of the power house artist in the making.

Gigi Lamayne aims to be the first female South African Hip Hop artist to go GOLD with her debut album, iGenesis & iGenesisRefill. Her Gigi Goes Gold (GGG) campaign was launched at the end of 2016 and by popular demand Gigi Lamayne will be touring across the country with her GGG campaign.

Over the past three years, Gigi Lamayne has kept the Hip Hop game interesting with her numerous free music downloads, surprise online music releases and visuals to accompany her music.