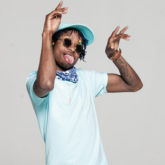 Benn Gilbert Kamoto, better known as Gemini Major, is a Malawian born Afro–pop singer and record producer. Born in June 1990, Gemini Major finished his high school in 2007 and later graduated in I.T in 2009. In the same year, he moved to Durban, South Africa to pursue his dream as an artist and record producer. Gemini Major has produced for a number of artists in a variety of genres ranging from R&B, Hip-Hop,House, Dancehal, Pop and Gospel. His portfolio includes production used in TV Shows such as Gold Diggers Season 3,Forever Young and Mo Love.

Gemini Major who is inspired by artists such as Wizkid, Burna Boy, Bob Marley and I-Octane, describes his music as “a celebration of music, love and life in recognition for both its pain and pleasures on a personal level as well as socially”.

After a chance meeting with Cassper Nyovest and his team at a video shoot for a song that Gemini Major had produced, he joined the Family Tree team, and he is currently working on his debut project. After the release of Nasty C’s hit single “Juice Back”, Gemini has become the go to producer for some of South Africa’s leading Hip-Hop artists. Apart from producing for some of South Africa’s top artists, Gemini has appeared on songs along side Khuli Chana and African legend 2 Face.

In 2016, Gemini Major was selected to participate in Season 2 of Coke Studio as a producer.

Performance at “Fill Up The Dome with CassperNyovest” (2015)