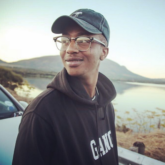 Born in Mtatiele, a small town in the Eastern Cape, Mthebeni eMtee Ndevu aka ‘’Emtee Da Hustla” to his fans, is a pure talent that has taken South Africa by storm.

Mthembeni grew up in Rockville where he discovered and embraced his love for music. The 23-year-old rapper discovered his passion for spitting catchy rhymes at the age of 9 at Yeoville primary school during a talent show in 2001. He participated in musical activities from joining the choir to taking part in school plays. Emtee completed matric at Barnata high school where he became the youngest choir conductor. This earned him awards and first income at 17 at provincial competitions for his school and his Marimba band.

2008 was a year where Emtee pushed mixtapes amongst his peers and gained streetcred. In 2010 Emtee met rapper Maraza, whom he collaborated with on a song titled ‘In it to win it’. Which helped build his name on the streets. They started a group called ‘4front’, specializing in electro, dub step and rap. 2013 saw the group split to focus on solo careers. Emtee released an EP called “Do it Yourself” (DIY).