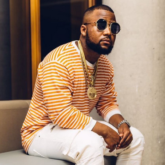 Cassper Nyovest born Refiloe Maele Phoolo on 16 December 1990 in a Ma keng village called Montshiwa came from humble beginnings. Cassper attended Sol Plaatjie’s High School however, his love for performing before crowds developed at an early age in primary school where he’d always fight to be on every single play and show. The stage became his home and his love for performing never stopped growing, as he would also later come to see, neither would the crowds.

Inspired by his late brother “Khotso Motebang Phoolo”, who was also a rapper, but sadly passed away in 2003, Cassper decided to take on the music world and hasn’t looked back since. He went on to become a member of CHG (Childhood Gangsters) in 2004, then later joined a group called ‘Slow Motion’ which had 8 members including Ganja Beatz Producer, Aashish Gangaram of Feel d’ Dream Entertainment. In 2008 at the age of 17 Cassper signed a record deal with ‘impact Sounds’, arguably the strongest Motswako label at the time with artists such as Tuks Senganga & Morafe to name a few. After 2 full years with the label, Cassper & ‘Impact sounds’ parted ways due to creative differences. A few months later he wrote a song “Holla at a Pantsula”, the song became an instant hit in his neighbourhood and got him recognition from a few reputable record labels.

Cassper Nyovest released his debut album, Tsholofelo, in July 2014 to rave reviews from his fans and critics alike. Tsholofelo shot to number 1 immediately on release on iTunes and remained there for 9 weeks. The album hit a record 12 cities sold out tour in South Africa, a further 15 shows titled #Tsholofelo4Platinum followed which also sold out at every venue. Tsholofelo went Gold in a little over 2 months of release, then in just 8 months of release went Platinum..

Unquestionably continues to be a amongst the best selling HipHop albums in the country. On 31 October 2015 CASSPER MADE HISTORY by becoming the  first African artist to sell out The Dome which has a 20 000 capacity. The concert Fill UP The Dome was hosted at the Ticket Pro Dome (previously Coca Cola Dome), which is considered in the same class as some of the most prestigious venues in the world i.e Madison Square Garden, Staple Center, O2 Arena to name a few. On the same day that Cassper made history by flling up The Dome, he released his sophomore album self titled REFILOE, which was certi ed to be Gold in 3hrs. The album was then released digitally and it debuted at number 1 across all genres on iTunes. Already named a pioneer in the African hiphop industry, Cassper’s quest to become amongst the greatest globally has just BEGUN!!!!