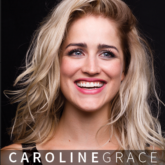 Caroline-Grace was born in Bloemfontein on the 14th of July 1986. From a young age she has loved music captured in all sorts of forms, whether it be musical theatre, dance, art or martial arts.

It was in 2004 during her matric year when she fully realised her desire for singing when she was given the lead female role in the musical Oklahoma as “Laury”. In 2005 she achieved first place in the Volksblad Spontaan singing competition and as a result her singing career successfully developed as she was given the opportunity to perform at various functions and special events such as: Rapport Sing Jou Taal, Arco Musica goes Vintage, Kovsie Extravaganza, Oprah Winfrey’s Graduating Ceremony to mention a few.

She is classically trained in Ballet, Modern, Spanish and Tap dance.
She obtained her LLB degree at the University of the Free State in 2012 and completed her practical years as candidate attorney at Phatshoane and Henney Attorney’s.

In 2012 she obtained the lead female role as Belle in Beauty and the Beast, a musical presented by Eunice High School. In 2013 she performed as lead female artist amongst Jak de Priester and Valiant Swart in the Grey College Choir Festival. In 2014 she performed as female soloist at the Bloemfontein Vryfees in “Some Enchanted Evening” presented by the Free State Symphony Orchestra alongside Aubrey Lodewyk.

Performing arts is her passion and her drive and she gives thanks to God for such an amazing gift.