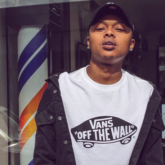 A-Reece was born and bred in Pretoria on 27 March 1997. Raised by the streets of Pretoria, the hip-hop talent has always believed that his words and musical truth would be heard by the world. A-reece started writing in primary school. His earliest memories of music were inspired by his brother Solomon Mataboge aka PJ, from the well-known group B3nchmarq.

A-Reecehas always looked up to his brother and followed a similar path as him in his music career. He confesses that his brother PJ was the first person to hear his lyrics in primary school and the best advice his brother gave him was – “Write-more!”

A-Reece admits that he always felt that he is ready to share his music, however, when the moment came to sign a deal, Ambitiouz Entertainment requested that he finish matric first before he focused on the music. For A-reece, 10yrs of waiting on his dream was worth a few months of sacrifice to complete high school. “You have to be ready for the moment, even if the moment warrants you to be patient!” says A-Reece.